ESO discovers most similar planetary system to our own

Astronomers have discovered a planetary system containing at least five and possibly seven planets, orbiting the Sun-like star HD 10180.  It makes the system the most similar to our own yet discovered.

The team also found evidence that the distances of the planets from their star follow a regular pattern, as also seen in our Solar System. 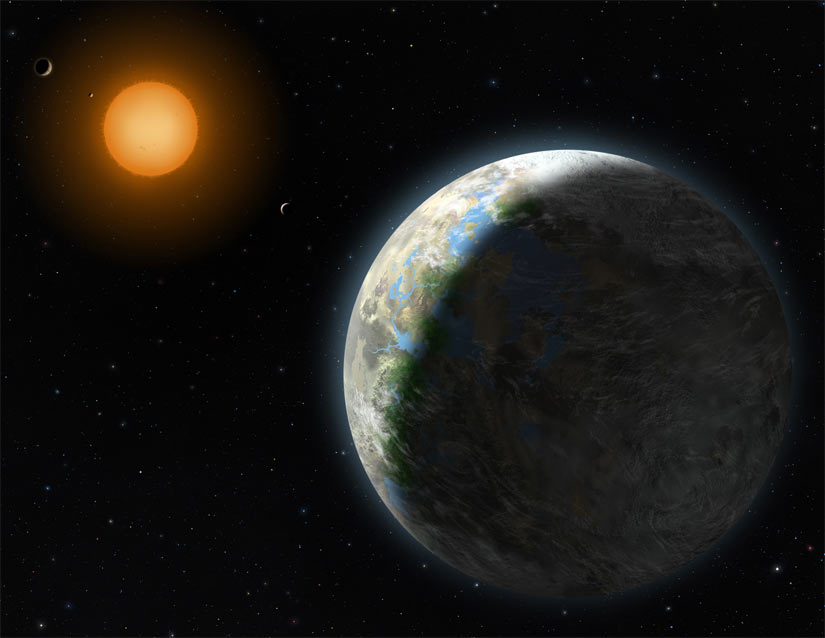 "We have found what is most likely the system with the most planets yet discovered," says Christophe Lovis, lead author of the paper reporting the result.

"Studies of planetary motions in the new system reveal complex gravitational interactions between the planets and give us insights into the long-term evolution of the system."

The team used the HARPS spectrograph, attached to ESO’s 3.6-metre telescope at La Silla, Chile, for a six-year-long study of HD 10180, located 127 light-years away in the southern constellation of Hydrus.

The astronomers detected the tiny motions of the star caused by the gravitational attractions from five or more planets. The five strongest signals indicate planets with roughly the mass of Neptune, which orbit with periods ranging from six to 600 days. They lie between 0.06 and 1.4 times the Earth–Sun distance from their star.

"We also have good reasons to believe that two other planets are present," says Lovis.

One would be a Saturn-like planet orbiting in 2,200 days. The other would be the smallest exoplanet yet discovered, with a mass about 1.4 times that of the Earth. It's very close to its host star, at just two percent of the Earth–Sun distance.

"This object causes a wobble of its star of only about three kilometers per hour — slower than walking speed — and this motion is very hard to measure," says team member Damien Ségransan. If confirmed, it would be a hot rocky planet, similar to Corot-7b.

The inner region of the system is more populated than our own. It probably has no Jupiter-like gas giant. Unlike in our solar system, all the planets seem to have almost circular orbits.

So far, astronomers know of fifteen systems with at least three planets. The last record-holder was 55 Cancri, which contains five, two of them being giant planets. “Systems of low-mass planets like the one around HD 10180 appear to be quite common, but their formation history remains a puzzle,” says Lovis.

Using the new discovery as well as data for other planetary systems, the astronomers found an equivalent of the Titius–Bode law that exists in our Solar System: the distances of the planets from their star seem to follow a regular pattern.

They also found a relationship between the mass of a planetary system and the nature of its host star.

"This remarkable discovery also highlights the fact that we are now entering a new era in exoplanet research: the study of complex planetary systems and not just of individual planets," says Lovis.

Categories: Do u know this ?

Oops, you forgot something.

The words you entered did not match the given text. Please try again.

Start a Free Blog at Webs.com